The Religion of Anti-Science Fanaticism

I've said it before and will say it again. We all need to work together to call people out when they toss around the term "anti-science" or when they claim they "believe in the science." For too long, we have accepted the misapplication of this anti-science term instead of rightly questioning those throwing it around.

Employees in the health field (licensed doctors, nurses, researchers, etc) are not "science." They are people, yes, mere humans! And they have gone through standardized education and training to perform basic duties. Duties you can perform, too. They are not the only people who can learn about the world around us. And they are not the ultimate authority on a world we are still learning more about daily.

Science is a particular method of study. Not a group of people. Not a majority rule. Not a community that all agrees on one idea. Not an ultimate truth.

This science is also continually challenged, improved, and altered as people gain more knowledge and continue to explore our world. Remember the infamous Dr. Semmelweis who attempted to convince doctors to wash their hands and instruments to save women from childbed fever? 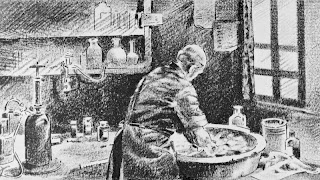 "What Semmelweis had discovered is something that still holds true today: Hand-washing is one of the most important tools in public health. It can keep kids from getting the flu, prevent the spread of disease and keep infections at bay. You'd think everyone would be thrilled. Semmelweis had solved the problem! But they weren't thrilled. For one thing, doctors were upset because Semmelweis' hypothesis made it look like they were the ones giving childbed fever to the women."
http://www.npr.org/sections/health-shots/2015/01/12/375663920/the-doctor-who-championed-hand-washing-and-saved-women-s-lives


If you believe "science" is already determined, and is merely about majority consensus, you are actually referring to religion.

If you believe a potential finding in scientific studies, or hypotheses presented by scientists are unquestionably true, you are actually talking beliefs.

If you believe in this concept of science above all else, and cannot consider criticism or permit this science to be challenged or questioned, then you are following dogma.

If you believe all people must follow this science without doubting or searching for more answers, you are demanding an act of faith.

If you believe that the amount of science you have at your hands right now is the ultimate knowledge, and that all people must be compelled through peer pressure or laws to follow this science, you are attempting to make our country a theocracy.


"Theocracy is a form of government in which clergy (doctors) have sovereignty over a territory (medicine) and official policy is either governed by officials regarded as divinely guided, (from dogmatic science) or is pursuant to the doctrine of a particular religion or religious group (pharmaceutical company and lobbying groups)."

What is real science? What does it mean to be pro-science? Who is supporting scientific exploration?

People who want to EXPAND knowledge about our world are scientists.

People who FIGHT for ethical, empirical experiments are fighting for science.

"Nevertheless, in many U.S. hospitals today, the management of labor and delivery doesn’t look very evidence-based. Many well-intentioned obstetricians still employ technological interventions that are scientifically unsupported or that run counter to the evidence of what is safest for mother and child... These problematic motivators are not unique to obstetrics, but obstetrics seems to be particularly resistant to the evidence..."
http://journalofethics.ama-assn.org/2013/09/msoc1-1309.html

People who want to SILENCE opposing voices are anti-science.

People who HARASS, BULLY, or THREATEN those who question are anti-science.

People who CONFUSE fanaticism with science, who confuse profit with ethics, who confuse advances with empirical development, are anti-science.

People who SUPPORT a government operating as a theocracy based on dogma are anti-science.

People who try to FORCE others to follow an outdated, unproven, unethical medical program are religious fanatics.

When you use the anti-science label, apply it where it belongs. And if you see someone using it inaccurately, correct them. People can and do change when presented with information.

"More recent health care provider graduates had 15% decreased odds of believing vaccines are efficacious compared to graduates from a previous 5 year period; had lower odds of believing that many commonly used childhood vaccines were safe; and 3.7% of recent graduates believed that immunizations do more harm than good. Recent health care provider graduates have a perception of the risk-benefit balance of immunization, which differs from that of their older counterparts."

STOP! Are you debating with a narcissist?

Custom medicine for your child.
Here and here.

Do you have blind faith?
Posted by Guggie Daly at 11:18 AM