Check your Cartwheel app! Target released a 50% off Cartwheel offer for Suja juices. Even better, you can submit your receipt to Ibotta and receive a $1 rebate! If you have any peelies or tags (coupons directly placed on the product) you might snag free or NF (nearly free) juices! 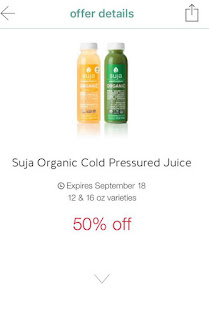 They are organic, cold-pressed, and raw. I've noted two cons. One is that they are in plastic bottles. Yeah, sorry about that. Second is that some of them have a LOT of sugar. As in, 44-60 grams per serving. Those who press or slow masticate know that this can be a pitfall due to trying to make raw juice taste "good" so just keep an eye out for that. They have 3-4 options that are low sugar including a classic green bottle. I prefer the purple one as it seems to taste the best but has a moderate 6 grams of sugar. Other than that, $1 a bottle is a steal for cold-pressed, organic juices so I'm definitely not trying to nitpick!

If you don't have Ibotta yet, please consider signing up through my referral link here. It's an app where you receive direct cash back for purchasing certain items. Obviously, the trick is to get things with coupons, on sale, or items you already need. Once you reach $20, you can buy giftcards or have it transferred straight to paypal. 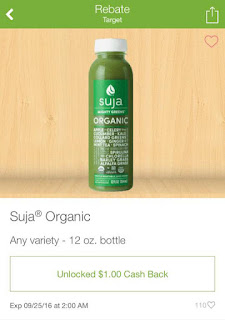 Posted by Guggie Daly at 8:09 AM No comments: Links to this post

One of the biggest mistakes people make is looking only at one toxin, one path of injury, or one environmental factor. It's a big mistake I call the "one myth." Don't fall for the mistake of "one toxin, one danger, one exposure." We damage transgenerationally, from one generation to the next, while living in an accumulative and multi-faceted environment.

Some common statements that fall into the one myth include:

"Well, my child is vaccine free and still has XYZ condition." (What about previous generations?)
"He only had one vaccine."
"She had antibiotics one time and I gave her probiotics."
"He's never, ever used fluoride products but his teeth show fluorosis."
"If it's true that this toxin/vaccine/medicine/method causes damage, then all kids would be hurt!"

It's all about how many cards are stacked in one direction. We've discussed this with a few other examples. For reference, see my article on MTHFR and circumcision here. Another one about FASD is here. I call this situation an "epigenetic cascade" since it frequently involves multiple systems and levels from the cellular to metabolic and from the immune system to the digestive system.

Those of you who have researched birth choices in our society recognize a birth example of a cascade: When the woman enters the hospital too soon, she ends up consenting to medically contraindicated pitocin, which then requires epidural anesthesia to withstand. This can develop into a downward spiral where she is rushed off to the OR for an emergency c-section. The idea of epigenetic cascades is similar.

When it comes to a cascade, if the person cannot see the many puzzle pieces and how they fit together, tracing the path back through the multiple factors to begin healing is difficult if not impossible.

I have another example for you today.

Here's your case profile: Take a mother who was vaccinated in the 70s, 80s, or even early 90s. Remember that ethylmercury in the product called thimerosal was used in pretty much all standard vaccines until thimerosal was slowly phased out starting in the late 90s. Ethylmercury is a specific form of mercury, different from what's in your tuna, with very little medical literature available to assure us of its safety. It was grandfathered in (let in the back door without stringent safety research) decades ago. You can read more about thimerosal here.

So anyways, here's this woman who got all her ethylmercury-containing vaccines. She also went to the university for a college education and perhaps she works in the healthcare industry, education industry, food industry, government sector/military, etc. This means she received recent vaccines for college and her job, so she was exposed to ethylmercury and then later exposed to various forms of aluminum.

As is normal for the majority of U.S. citizens with some level of health insurance, she has several silver amalgam fillings, which contain mercury. Research continues to show that these silver fillings emit mercury vapors. Additionally, because she is pregnant after a lifetime of SAD (Standard American Diet) and receives inadequate or no dietary education from her OBGYN, her teeth are starting to experience enamel hypoplasia, releasing small chunks of the fillings. This leads her dentist to encourage new mercury fillings during pregnancy, assuring her that they are safe. She consents.

The CDC now tells healthcare workers that all pregnant women regardless of family history, medical history, or any other epigenetic or health factors, must receive the flu vaccine and TDaP vaccine during each pregnancy no matter how many pregnancies she has or how close together. You can read the CDC's statement here. It's important to note that several brands of the flu vaccine contain thimerosal (49% ethylmercury).

If the woman is very knowledgeable and a strong advocate, she will know to request thimerosal-free flu vaccines. She doesn't know there's a difference and her doctor doesn't mention it, so she receives the brand that contains 25-26mcg of ethylmercury. Or let's say she does know and she fights for a mercury-free version, but her doctor tells her that supplies are limited and only the mercury version is available, so she relents. Her doctor also stocks the the TDaP vaccine that still has trace amounts (up to .5mcg) of ethylmercury in it, along with a heavy dosage of aluminum far beyond the EPA safety limit. The two heavy metals might react synergistically, but she isn't informed about this. She gets all the suggested vaccines during pregnancy.

She gives birth to a baby without obvious incident. Her child shows signs of mild midline defects such as tongue tie, sacral dimples, a deviated septum, and rib cage abnormalities. She is unaware that these small differences mean anything and none of the health care providers involved with the birth or post-partum care are educated on the topic, or otherwise don't tell her. She consents to the CDC's standard childhood vaccination schedule, so her newborn receives multiple vaccines roughly every 2 months from birth onwards. This includes some brands that still have trace amounts of ethylmercury and hundreds of micrograms of aluminum in various forms.

Her child also receives tylenol before, during, and after his routine circumcision. You can read more about why tylenol is specifically damaging here. And around 6 months, she begins to supplement with formula and slowly weans him off human milk. He's exposed to synthetic vitamins, high levels of fluoride, aluminum, BPA, and perchlorate from the fluoride and tapwater.

As her child reaches age 1, he displays enamel hypoplasia and erosion in his baby teeth. This is a common issue due to a variety of factors such as dioxins accumulated in her milk, fluorosis from exposure to fluoride products, and the uterine exposures we just listed. She seeks help online and some people try to tell her that the tongue tie somehow caused it instead of rightly recognizing that they are comorbid conditions from all the factors we've discussed here, so she takes her child in to get the tongue tie surgically removed. She's instructed to give her 1 year old tylenol before and after the surgery for pain management so he experiences more liver damage and immune system damage.

She wants to be healthy on a budget and get her body back. So she eats 1-2 servings weekly of tuna during her pregnancy and continues after her baby is born. She quickly begins feeding her toddler tuna, too. Tuna contains high amounts of methylmercury, even higher than previously believed.

Our medicine should never be all the same.
Don't fall for the "one myth" when it comes to epigenetics, nutrigenomics, and your child's individual lifetime exposure to toxins and medical interventions.

"Generally, the results indicate that prenatal exposure to metallic vapor causes alterations to both spontaneous and learned behaviours, suggesting some deficit in adaptive functions. Coexposure to methylmercury, which by itself did not alter these functions at the dose given in this study, served to significantly aggravate the changes."

Related on the blog:

One size does NOT fit all
Posted by Guggie Daly at 11:49 AM No comments: Links to this post

Our First Day Back to School!


I've seen a variety of creative ideas for back to school photos that run from celebrating to condemning the season.

Although we emphasize child-led learning at every stage and we are "officially" life learning (a less politicized and dogmatized form of unschooling), we still choose to celebrate this season, looking at it as a positive form of social acceptance and cultural reference. The kids call it "leveling up" and are excited to post with their board.

Partially for great memories, and partially for their school portfolios, I also compile all of our learning-related photos into a yearbook using Shutterfly. It creates a beautiful, hardcover photobook that tells the story of our school year. If you search around, you can almost always find free codes!

We recently celebrated our first day back to school with a pool party, movie night, and dinner at Ihop. Everyone is excited to get into a loose but helpful structure as we prepare for the weather to switch over and the pools and splash pads to close. Our traditionally schooled friends (at home or schools) left in August so my kids are ready for a different rotation of activities and more field trips compared to the laidback days we've had in the creek, forests, and pools. 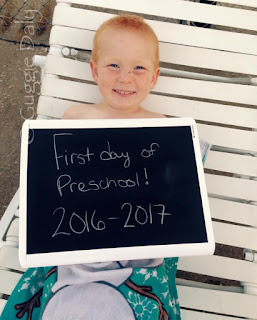 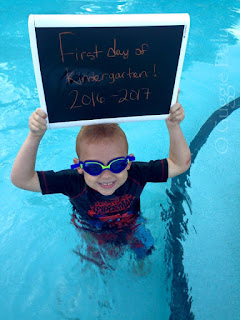 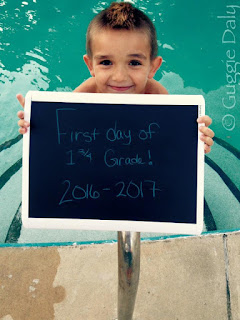 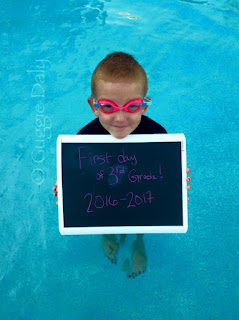 Posted by Guggie Daly at 3:56 PM No comments: Links to this post

Have you been stalking the Vitamix models at Target? The Professional Series 200 went on official clearance a couple weeks ago! They are currently holding at $307 in my region. (Remember that clearance timing and tiers varies by location.) That's over $100 off the original price. And if they stay put long enough, they will get marked down again and again.


Even better, Target Cartwheel released an offer specifically for 10% off Clearance Small Kitchen Appliances. If you find a Vitamix on clearance, you can stack the Cartwheel offer to save even more. This Cartwheel expires on September 9th, so if you are in the market for a new Vitamix, be sure to check out the clearance at Target ASAP. Also remember to add the Cartwheel offer to your list right away since popular offers can be limited. 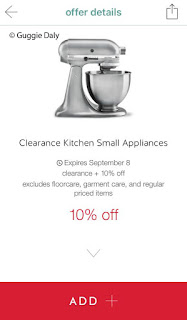 Remember the #1 Slick Dealing Rule: NEVER CALL ON A DEAL! You need to step into your local store(s) to scope out the potential clearance for yourself. Happy Hunting!
Posted by Guggie Daly at 9:44 AM No comments: Links to this post