You thought, "The Day I farted in front of Sexy Man at the Park" was stellar.

Now, I bring to you, "The Day a Svelte Firefighter Thought I was too Fat to Ride."
Yes, this wonderful moment is brought to you because my children saw a ladder ride at a local festival. Better yet, it was free. For the price of free, we could stand in line for what I quickly sized up to be about 50 minutes and get to ride on a firetruck ladder for about 90 seconds.
Enthused, my children ran at break neck speeds straight to the line while shrieking that they had to do this or their little lives would be disrupted and I'd have to add an additional bonus to their Future Therapy Funds.
As my children tried to lick the ground, stomp on bugs, bite each other and generally be a nuisance for 50 minutes in line, I couldn't help paying attention to the process of preparing for this ride. A firefighter living up to every woman's Harlequin Romance Fantasy was helping each family prepare by adjusting harnesses onto the children and large belts onto the adults, similar to what you'd wear while rock climbing or using heavy machinery. 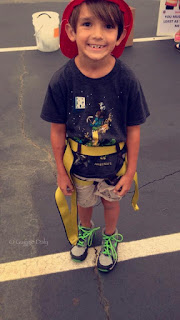 Several moms in front of me, all of similar size and build, were instructed by Svelte Firefighter to wear a children's harness as the large adult belt wouldn't fit them.
Once it was our turn, I intended to reduce the level of soul-wrenching stress caused by 4 small children climbing into harnesses to beat a 90 second ride by jumping quickly into the harness like the other women.
This is when Svelte Firefighter became concerned. Scrunching up his gloriously handsome face, he turned to me and loudly said, "Ma'am. That harness is for children. I'm going to need you to wear this belt."
Now, this is fine. Besides the pressure of 4 piranhas vibrating like charged electrons behind me, I also am pretty satisfied w/ my round, amorphous blob of a body. So, to hurry up this awkward interaction, I quickly replied, "No, no! It's ok! I know!"
What I meant: I know, I'm fat. I'll gladly shove this large belt on if it means my demon spawn can get into this ride faster after standing here with an audience for almost a solid hour. Let's do this!
What Svelte Firefighter thought I meant: No, I'm not fat. I know it's ok for me to wear this children's harness. Go away so I can disobey you.
So in a louder voice, he goes, "Ma'am. You really cannot wear it. It is way too small for you."
At this point, I've already shed the harness and am over at the large, grey belt, wrapping it around my massive midsection. I pause, look up while one of my crotch fruits is head banging my butt, and quickly say, "It's ok! I know! I got this."
All these loud voices draw the attention of what appears to be Stocky Firefighter Leader. Puffing, he quickly runs over to resolve an argument that doesn't exist. He raises his hands at me and says, "Ma'am, don't worry. He knows what he's doing. Just listen to his instructions."
I smile at him, hoping to disarm this so I don't end up on national news. At this point, others in the line are making faces and chittering noises because everything is odd. I'm pretty sure another woman in the line calls out something like, "If she's fat, I'm Oprah Winfrey." But, hey, 4 kids, a ladder descending rapidly towards me, lots of harnesses, and sexy firefighters kind of reduced the blood flow to my brain at that moment so I can't be sure.
"I appreciate it. I'm totally fine and doing as he says. See? I have the grey belt on now."
Stocky Firefighter Leader walks over to inspect the belt around my midsection and says, "Let me loosen that for you. I don't think it fits you."
At this point, another woman in the crowd actually makes a disgusted sound. As if suddenly realizing he's surrounded by enough female apex predators to tear him limb by limb, he freezes, bent over towards genitals, hand frozen near my chest. It would've made an amazingly compromising viral meme. I burst out laughing. And then I made the mistake of the decade. Forgetting how it must be for Firefighters as Fine as Frog's Hair who have many outrageous girlfriends, I looked down at him and said, "It's totally fine, really! Everything is fine."
The Secret Girl Word uttered, both firefighters turned crimson red and started to hyperventilate. Every man w/ an unstable female partner or mother in his life was now staring at me in horror.
The ladder arrived. Muscle Firefighter, unaware of all that had transpired in roughly 90 seconds, shouted out to me, "Going up?"
I jumped on, not looking behind me. We quickly put some altitude between us and the Awkward First World Problem of the Decade. I turned to Muscle Firefighter and beamed at him. He beamed back at me and said, "You look pretty darn cute for a mom to 4 kids, did you know that?" All I could do was coldly stare at him for 90 uncomfortable seconds.
And so, the moral of the story is to never go on a ladder ride with your piranha demon spawn crotch fruit. 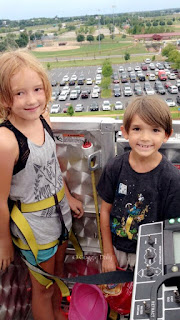 *It goes w/o saying, but since this is the internet, YES. This really happened. YES, the firefighters WERE that sexy. YES, it WAS pretty awkward.

Posted by Guggie Daly at 12:27 PM No comments: Links to this post